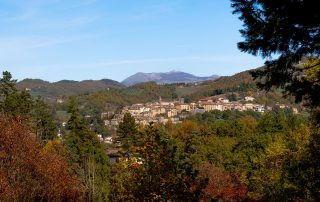 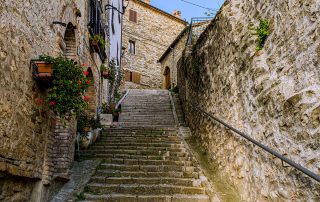 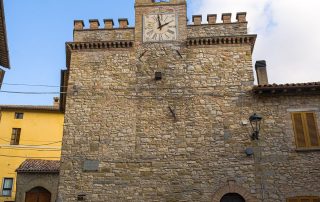 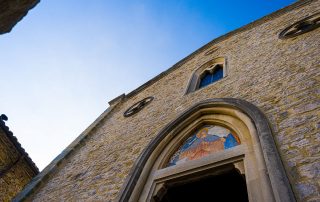 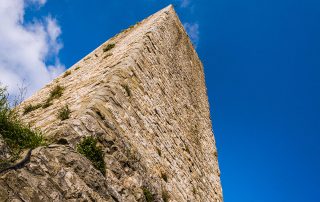 Pietralunga is a small Umbrian town that sits on the crest of a hill overlooking the Carpinella Valley. The surrounding landscape is characterized by an endless succession of rolling hills, that run along the sides of the valley and lead to the Apennine mountains ridge and the border with the Marche Region. In spring, the dense forests of oak trees and downy oaks give the hill slopes and the valley floor an intense green colour providing the area with peaceful corners of primordial nature.

The beauty of the places, their spatial and temporal remoteness from the chaos of modern life are also confirmed by a population density which is among the lowest in Umbria, just 2,300 people in a territory of over140 square kilometres with widespread settlement areas; each hilltop is home to one or more stone farmhouses often flanked by a small church. The small villages have very ancient origins dating back to the Bronze Age, when the nomadic shepherds of the Apennine community erected primitive strongholds on the hilltops of the area, the so called “castellieri”(i.e. fortified boroughs)and still today, in the territory of Pietralunga, there are as many as forty-six.

The foundation of the urban settlement called Tufi (ernu),however, can be traced back to the Umbrian people who settled in this territory in the 10th-9th century BC. Between the 6th century and the 8th century A.D., Pietralunga was rebuilt on the same hilltop where it stands today after being destroyed following the barbarian invasions. It turned into a fortified and strategic village used to control the communication routes that connected Arezzo, Tiferno and Gubbio along the North-South axis. The construction of the Pieve di Santa MariaChurch and the construction of the Rocca (i.e. Fortress), a majestic pentagonal Lombard fortress, date back to this period. Over time the territory of Pietralunga became a flourishing and populated village and so the name of the town was changed to Pratalonga to celebrate the green and flourishing pasturelands that surrounded it. Our visit of Pietralunga’s historic centre starts from Piazza Fiorucci (i.e. Fiorucci Square) and the first thing that catches one’s eye are the ruins of the Castle. Here one can admire the remains of the gateway to the ancient castle, built in Lombard times around the 8th century A.D. as a military outpost. In front of the Castle stands the pentagonal tower which was used for sighting and defence purposes and commonly referred to as the Rocca.

Inside the fortress walls were the quarters for the troops, the kitchens, the stables and the well for water supply. The Fortress has been modified several times over the centuries. Opposite the fort stands the elegant Palazzo Fiorucci(i.e. Fiorucci Palace). Built in 1612 on the boundary walls of the town by Giovan Giacomo Fiorucci, known as “il Magnifico” (i.e. the Magnificent) and by his brother Don Orazio, Archpriest of Pietralunga. On the other side of the square, we find the Town Hall. Built on a part of the ancient Lombard fortification, between 1498 and 1502, the Town Hall was commissioned by Monsignor Giulio Vitelli with the aim of representing these at of Pietralunga’s Archpriesthood. Subsequently, from the 17th century it was used by the Sacred Order of the Knights of Malta until 1888 when it became the seat of the Town Hall of Pietralunga. In 1892,based on a project by Engineer Scagnetti of Umbertide, various modernization works were carried out which modified the structure as well as the façade of the building. Inside the building, inthe main rooms, there are some antique stone fireplaces displaying the carvings of the Vitelli family coat of arms. At the end of the Fiorucci Square, stands the majestic Pieve di Santa Maria, the Parish Church of Pietralunga that was first built in the 7th century A.D. The current façade of the church is the result of a substantial change made to the structure and carried out in the early 1900s, which involved the demolition of the apse of the church to create a new entrance and close the original one. The interior of the church has an irregular rectangular plan with a single nave. The nave is plain and unadorned, and it is interrupted only by large ridges supportingogival vaults. On the right wall of the nave, one can admire a fresco, an interesting work attributed to Raffaellino del Colle depicting the martyrdom of St. Sebastian, while a copy of the Polyptych by Ottaviano Nelli, an illustrious painter of the 15th century from Gubbio, can be found inside the Church chancel. The Polyptych by Ottaviano Nelli was originally kept in the Church of St. Augustine and it was later transferred to the National Gallery of Umbria. The exterior of the parish church of Pieve di Santa Maria is characterised by the Romanesque portal dominated by the upper rose window. The Romanesque portal was the church main entrance until the end of the 19th century. Unfortunately, in July 1944 during the Second World War, a grenade seriously damaged this interesting artwork causing irreparable damage. At the back of the Pieve di Santa Maria church, past the Canonica (i.e. residence of the parish Priest) garden, stands the Palazzo del Capitano del Popolo(i.e. The Palace of the Captain of the People) built in the early 15th century. The Palace was the seat of the Judge Captain, of the Government of the citadel, of the Civil and Criminal Court and of the jails located in the basement. At the back of the Palazzo del Capitano del Popolo, we can admire the ancient castle walls which surrounded the town. They have been recently restored and they are well preserved.

Continuing with the tour of the town, one can admire the palaces of the wealthiest and noblest families who have played an important role in the history of Pietralunga: The House of the Felicchi and the House of the Bonari families with the coat of arms of Beato Buccio Bonori, the House of the Urbani family with the latin inscription “ab Urbanis Urbana semper”on its portal and the House of the Martinelli family, a complex and elegant building located at the corner between Corso Matteotti and Via S. Agostino.

If we turn right and we take a few steps forward, we will see the Porta del Cassino (i.e. Cassino Gate), so called because in the past it was a guard post called “cassino” where, in turn, soldiers guarded the entrance to the fortress. It is well preserved, and it is the only one left of the three entrance gates that gave access to the town of Pietralunga.

If we walk back just a few meters, we will find the imposing complex of the Convent of St. Augustine. Its construction dates back to the 13th century and it played a vital role in the social and religious life of the community of Pietralunga until the mid-17th century when the Convent was  abolished and moved to Cantiano, a small town in the province of Pesaro. The Convent was also the seat of thepublic school of the town where regular lessons were held by Augustinian friars.

The Polyptych by Ottaviano Nelli, one of the best works of the painter from Gubbio, was kept in the church above the main altar. Today, it is housed in the National Gallery of Umbria.