Beautiful mountain landscapes, wide and narrow valleys, sunlit plateaus followed by large areas of woods, rivers and springs of pure water. The North-eastern part of the Umbrian territory is a diverse place, a crossroads of important millenary routes of communication, a land that has been able to preserve but also to contaminate its rich food and wine culture.
The morphology of the territory is certainly the one aspect that first influences and shapes the cuisine of the people of the area. It cannot be ignored if we want to describe the richness of the food that we find in these valleys overlooking the central Apennine mountains. The intense green of the dense woods of oak trees, turkey oaks and downy oak trees are the altar to the products that most characterize the culinary imprint of our land: the products of the woods. When speaking of them we cannot but begin our journey into the flavours of our territory by starting from the most precious product of our earth:“Truffle”, actually we should say “Truffles”.
The White Truffle (Tuber Magnatum Pico) also known as Trifola is the “king” of this family. The white truffle in order to grow and thrive needs particular conditions both in terms of soil and climate. The soil must be soft and damp for most part of the year, and it must also be rich in calcium and with adequate air circulation. In the vast territory of NorthEast Umbria, there are numerous so-called “Tartufaie”, i.e. particular areas where truffles grow in abundance thanks to favourable soil and climate conditions. The “Trifola” for example can be found in the surrounding areas of Pietralunga and in the vast ridges that surround the town of Gubbio, but each “cavatore” (i.e. truffle hunter)will never reveal the secrets to where the best “Tartufaie” are.
The less noble relative of the highly esteemed white Truffle is the black Truffle which is divided into its summer variety called “Scorzone” and its winter one called “Nero Dolce”.All of these varieties are of great importance to the food culture of our Region, and they are able with their excellent aromas of making a simple dish of gnocchi (i.e. small potato dumplings) taste very special, perhaps even more special if the gnocchi are made with the renowned potato from Pietralunga.
It is for this reason that a real industry made of truffle hunters, manufacturing companies as well as market and trade fairs revolves and flourishes around truffles. The menus of all the many trattorias of our Region offer hungry tourists delicious first and second courses and even desserts with this precious and unique ingredient.

The flourishing forests of the North Eastern part of Umbria also provide habitats for dozens and dozens of different species of wild animals that have been a precious food resource of primary importance since time immemorial. There is evidence that tells us that game was already a permanent presence on the tables of the Umbrians, the ancient people who lived in our valleys in pre-Roman times, representing a very important protein supplement to cereal growing.
Wild boars, roe deer, hares and wild ducks were all used in Umbrian cuisine to prepare traditional dishes such as roasts, stews and rich sauces for tasty pasta dishes.
Wild boars also play an important role in the food culture of this area. Their meat is not only cooked fresh but also, and perhaps above all, used to make different types of cured meats.
Alongside the wild boar, pig farms are perhaps the most typical livestock farming system of this Italian region. Pigs have always been of primary importance in agricultural and rural cultures. They are suitable for mountain areas where they are raised in a semi-wild state and fed with acorns, legumes and humble cereals as well as for valley areas with more structured non-intensive farming systems. Like its wild relative, i.e. the wild boar, farm pig meat is also the main ingredient of the cuisine of this part of Umbria, and it is with cured meats that Umbrian people have transformed pork meat processing techniques into a true art.

The Norcineria (i.e. pork butcher shop), a symbol of this millenary tradition, is the place that most represents the infinite ability of processing, preserving and turning pork meat into a culinary work of art. The visitor who enters a typical Norcineria is fascinated by the aromas, flavours and varieties of the different products: from hams and salamis to fresh and dried sausages, from pork sausages preserved in oil to pork cheek and tasty bacon.

In this part of Umbria, not secondary to pigs breeding, we also have the breeding of cattle and sheep aimed at the production of both meat and dairy products. The large Apennine mountain pastures favour the extensive breeding of high-quality beef cattle whose meat is lean, rich in aromas and organoleptic characteristics that only the immense variety of grasses and wildflowers of these pasture lands can provide. The high-quality breed of the Chianina cattle has very ancient origins. Their progenitors are big white cattle that are often depicted by Etruscans and Romans in procession and sacrifice scenes or in scenes of pastoral life. Today the Chianina breed is protected by the IGP label and bred by passionate breeders in the pasture lands of Monte Cucco and Pietralunga,that owes its name to the late Roman nickname “Pratalonga” thanks to the numerous pastures that surrounded it and that are a clear evidence of the millennial bond this territory has with cattle breeding.
Sheepbreeding, on the other hand, supplies the vital raw material that a thriving dairy industry transforms into the highly esteemed pecorino cheese whose many varieties enrich the food culture of Northeast Umbria. An entire encyclopaedia would not be enough to collect and discuss the many different types of pecorino cheese that we find by visiting the many “norcinerie”, small shops and taverns of our towns.
Pecorino cheese aged in the pit, produced in the area of ​​the Monte Cucco Park and in the territory of Gualdo Tadino, that has its roots in a millenary tradition that crosses the entire Italian Apennine ridge, finds in this area an extraordinary combination of traditional wisdom and food culture. Finely selected pasture hay becomes the fresh and rich raw material that gives the Umbrian fermentation pits local, distinctive and ancient flavours.
This traditional technique is then paired with farmers’ skills of seasoning the fresh small wheels of cheese,ready to be placed in the pit for aging, with local ingredients where of course we find the truffle, the “prince” of Umbrian flavours. Pecorino cheese infused with truffle is a delicacy that accompanies the platters of mixed appetizers traditionally served as a starter on a Sunday.

After exploring the mountains and valleys of the Umbrian North East to discover its flavours, it is now time to enter the houses of the Umbrian people to find, on the rich tables laden with cheeses and cured meats, what is probably considered to be the most interesting and known Umbrian culinary tradition, the “Crescia”. The Crescia is a kind of focaccia that has different names depending on where in Umbria you are from. In the North they call it “ciaccia”, a name also used in the valleys of Pietralunga, in the center part they call it“Torta al testo”, in the South it is known as“Torta sul Panaro”, and in Gubbio and its surroundings it is simply known as “Crescia”. Each place obviously has its own recipe to make this focaccia, but they all have one thing in common: its ancient origin.
We find evidence of its existence in the seven Iguvine Tables produced between the 3rd and 1st centuries BC, where, in the description of the ritual banquet, we find mention of the “mefa”, a mixture of water, flour and salt that cooked on large red-hot stones was served both as a main dish and as a side to other dishes. Today this millenary tradition lives on in the “crescia” and its many local varieties. Served hot, it is perfect with cured meats and cheeses of the Umbrian tradition and in Gubbio, the focaccia is always and perfectly paired with another well-known traditional Umbrian recipe, i.e. the chicken or mixed meat “friccò” seasoned with sauce and spices.

The “Crescia”is not the only traditional dish with very ancient origins. In Nocera Umbra for example we find the so-called “Biscio”, a salty dough that the tradition places in Lombard times. The phyllo dough made with little water, oil, flour and only rarely eggs, is rolled with skills until it is very thin; the dough is then filled with seasonal greens, sautéed and seasoned with a generous handful of grated pecorino cheese. The dough is then rolled-up tightly acquiring the shape of a snake (in Italian “Biscia”).Once it is cooked and taken out of the oven, the “Biscio” can be served both hot and cold. Tradition has it that it was the meal of pilgrims travelling on the Via Francescana who with great devotion reached Nocera the town where St. Francis spent his last days. The “biscio” is closely linked to the Saint’s philosophy of life because it reminds one of the essentials of life and poverty. The Ancient Monastery of San Biagio, also in the area of Nocera Umbra, is one of the most evocative and enchanting places where the production of Italian craft beers takes place.

In the rich tradition of bakery products in North East Umbria, there is one that deserves a special mention, i.e. the “Torta di Pasqua” (Easter Bread or Easter Crescia). It is served for breakfast on Easter morning, a traditional ritual typical of central Italy. It comes in two different varieties: a savoury version and a sweet one, and its shape is similar to that of a “panettone” (i.e. Italian traditional Christmas cake). The dough of the savoury version is enriched with local cheeses and, with its unmistakable flavour, is served warm or cold alongside traditional cured meats. 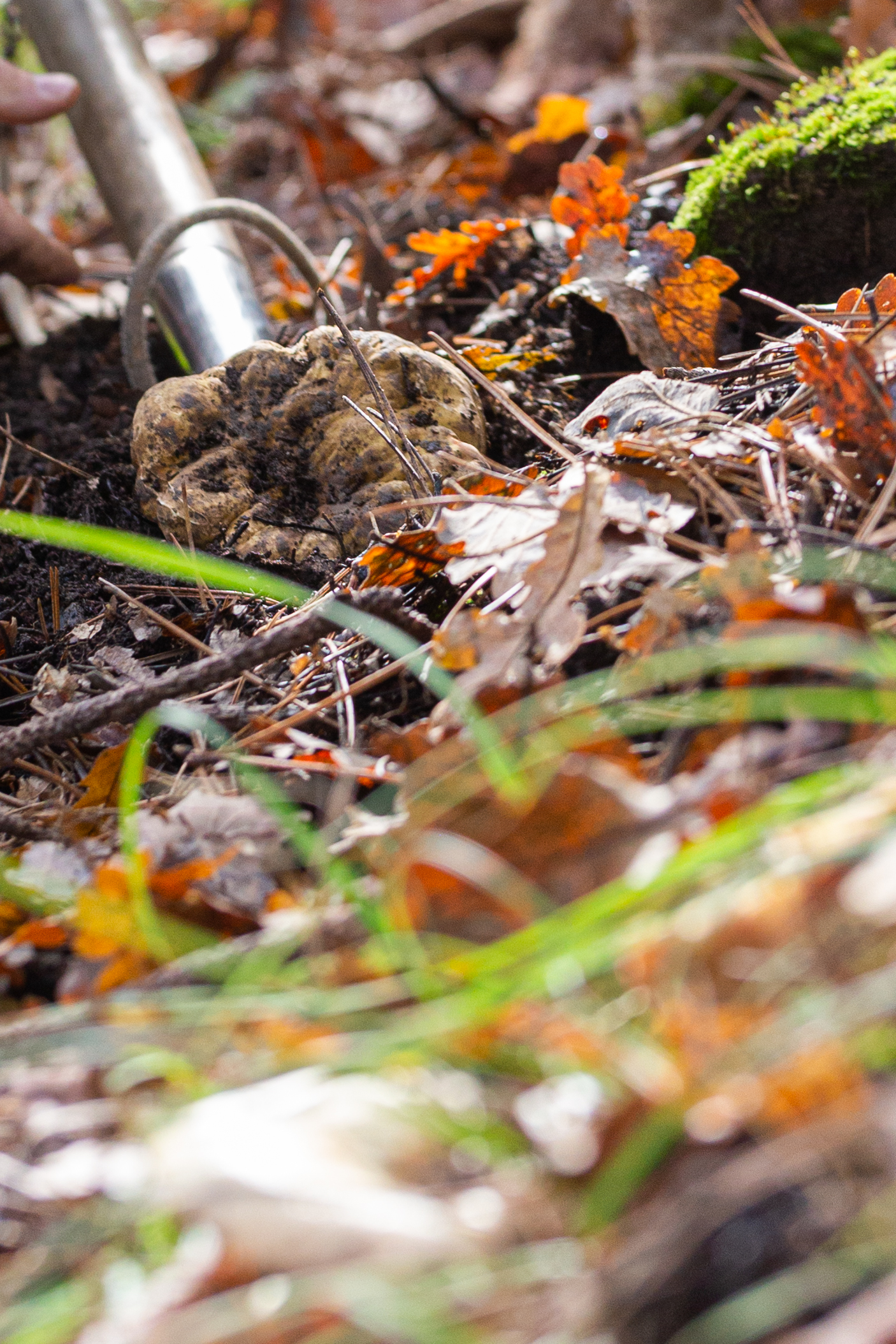 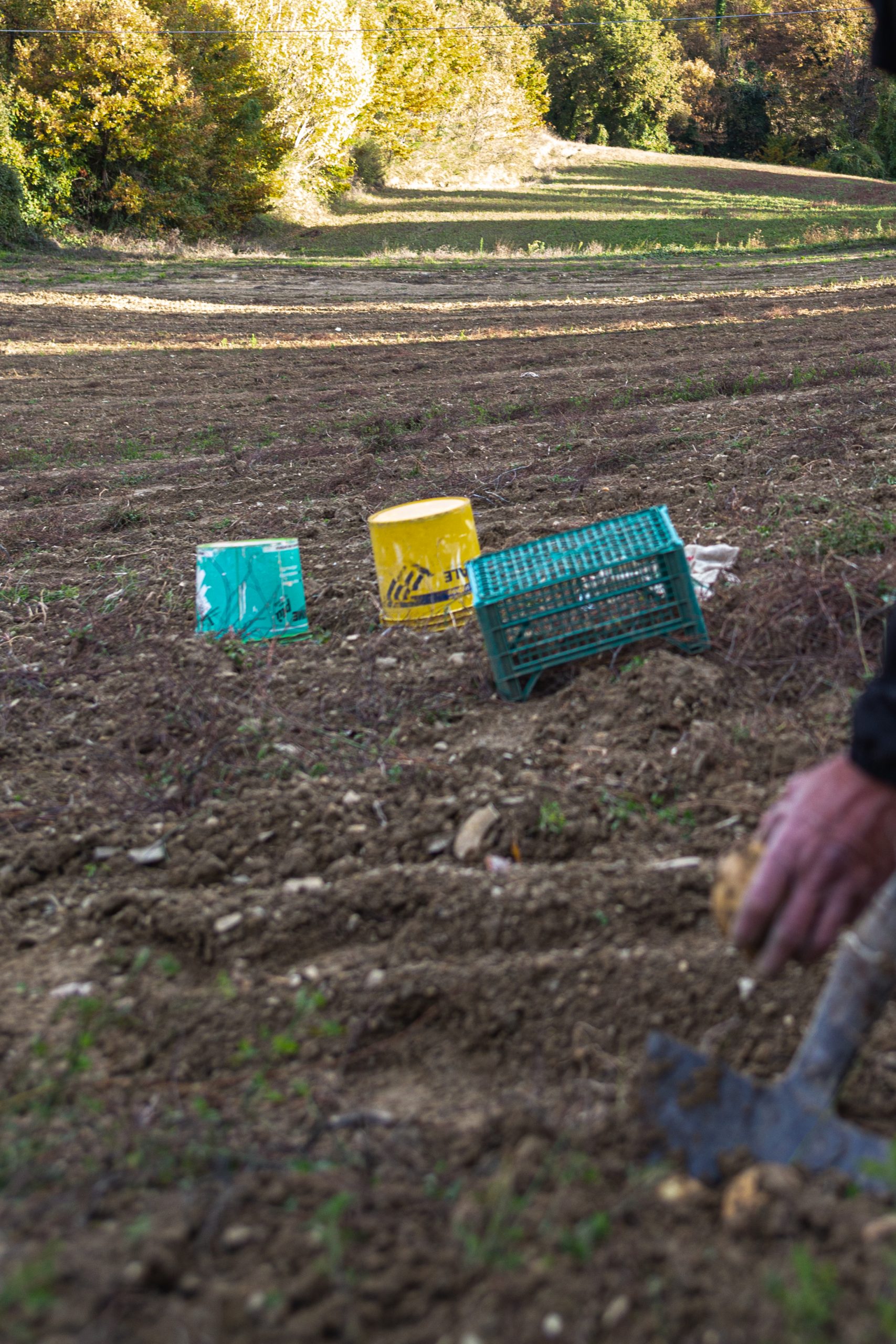 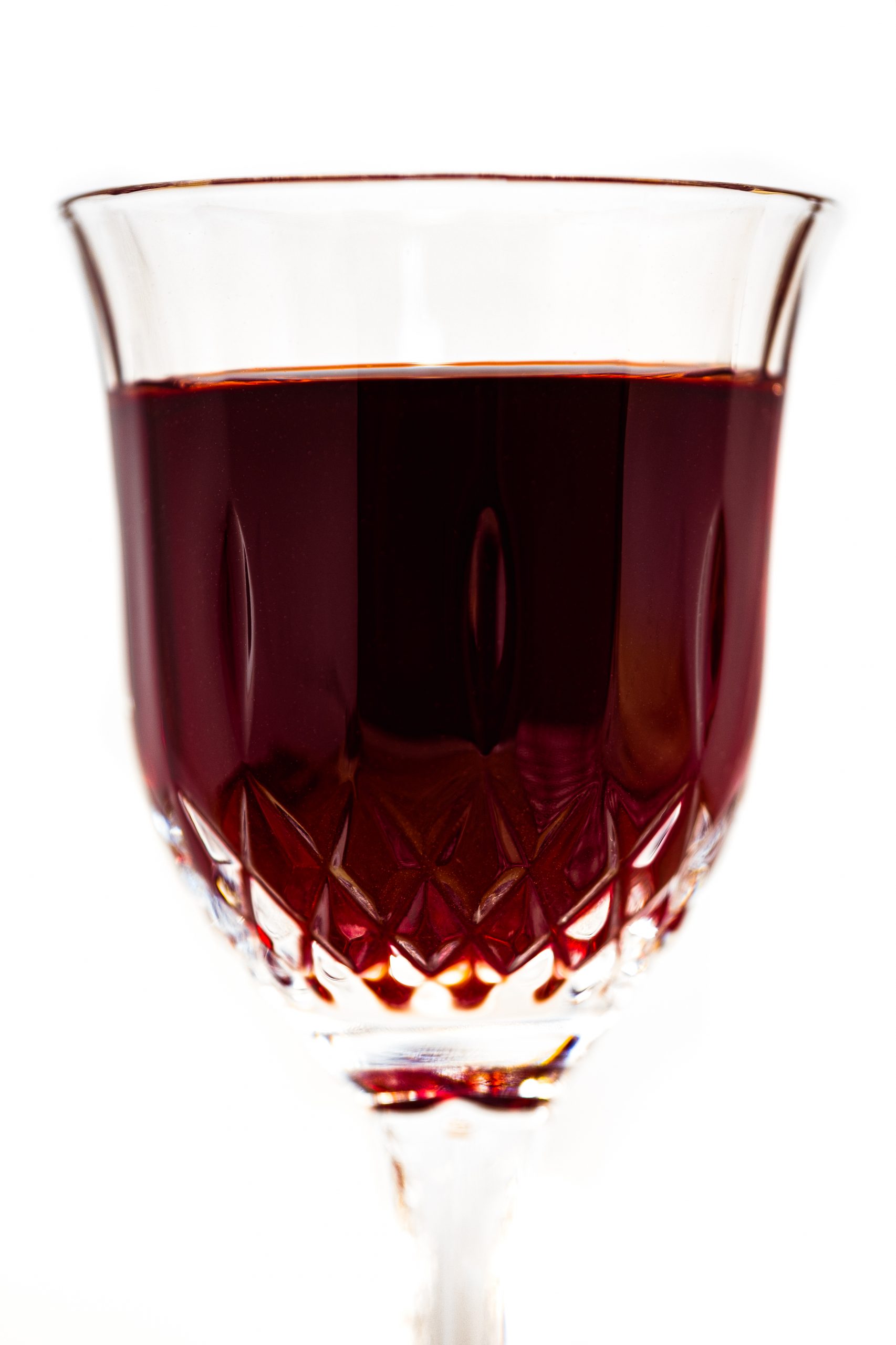 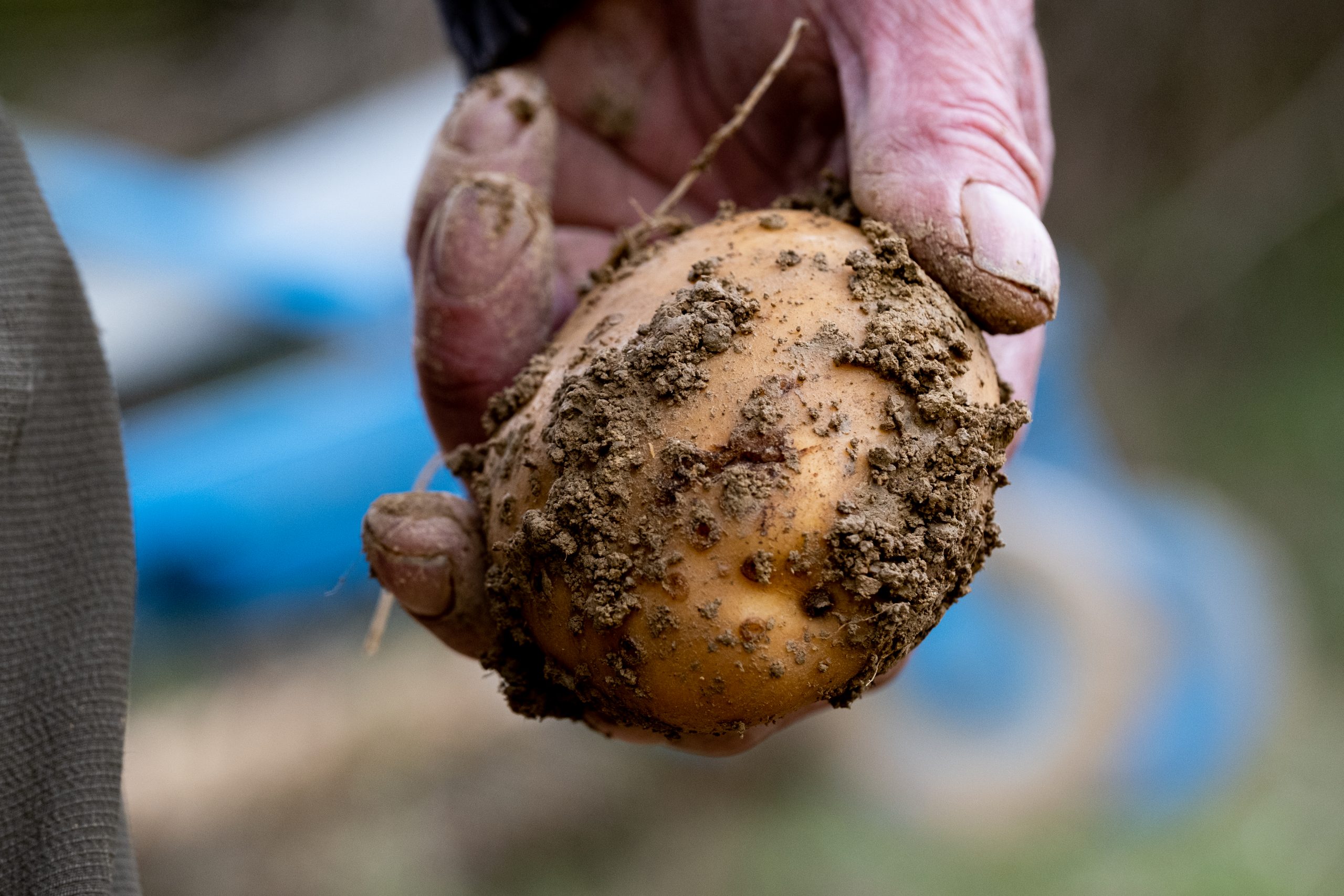 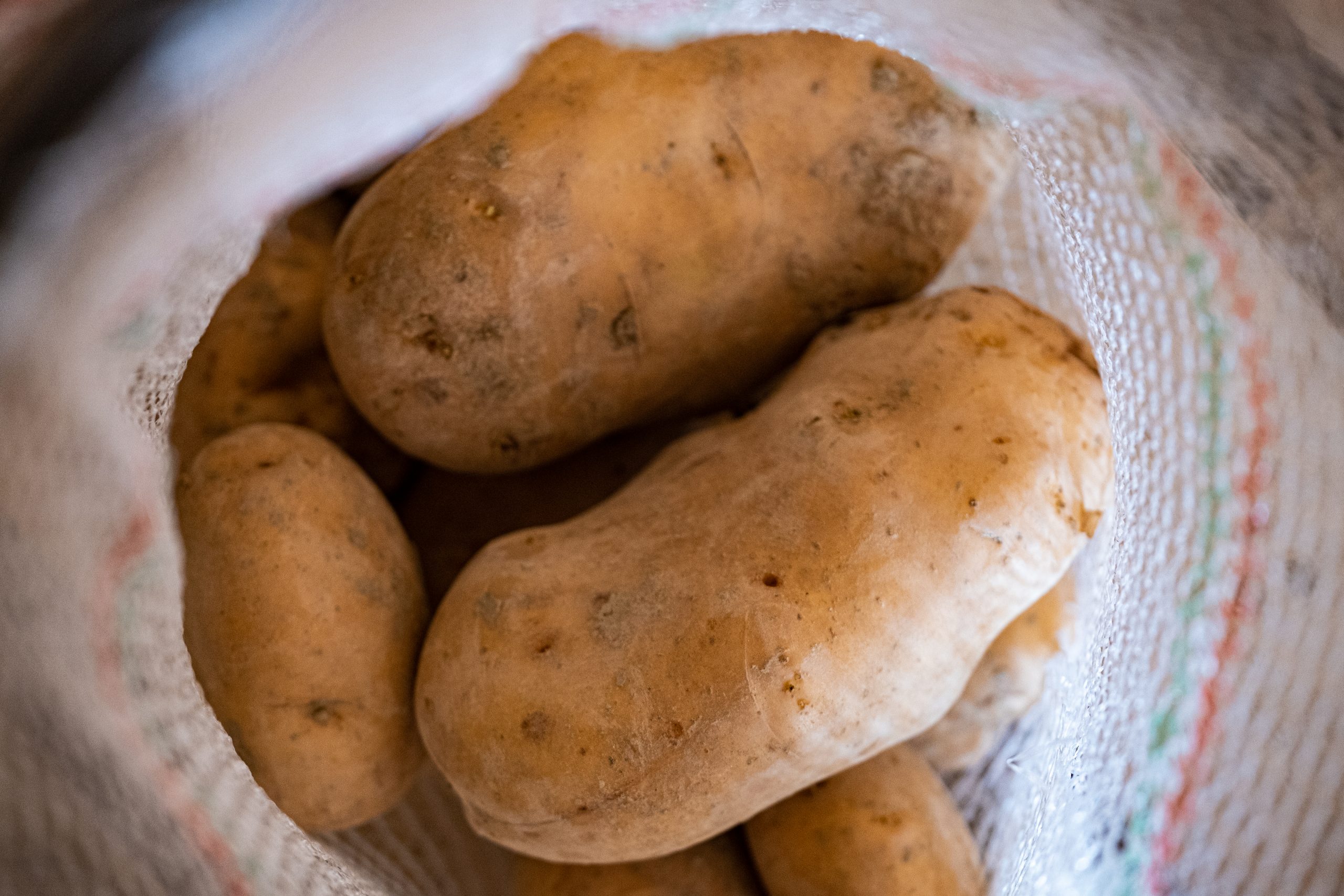 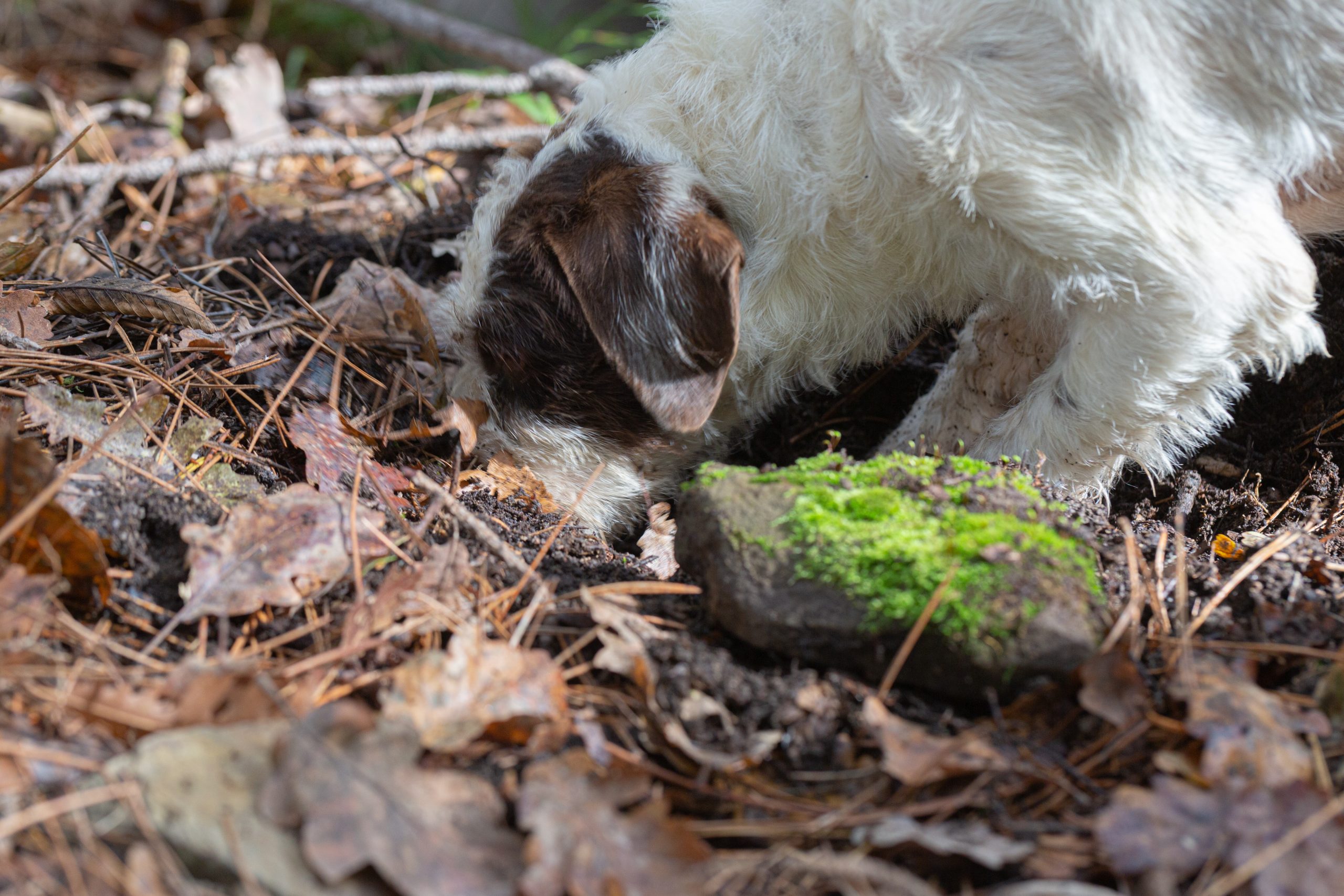 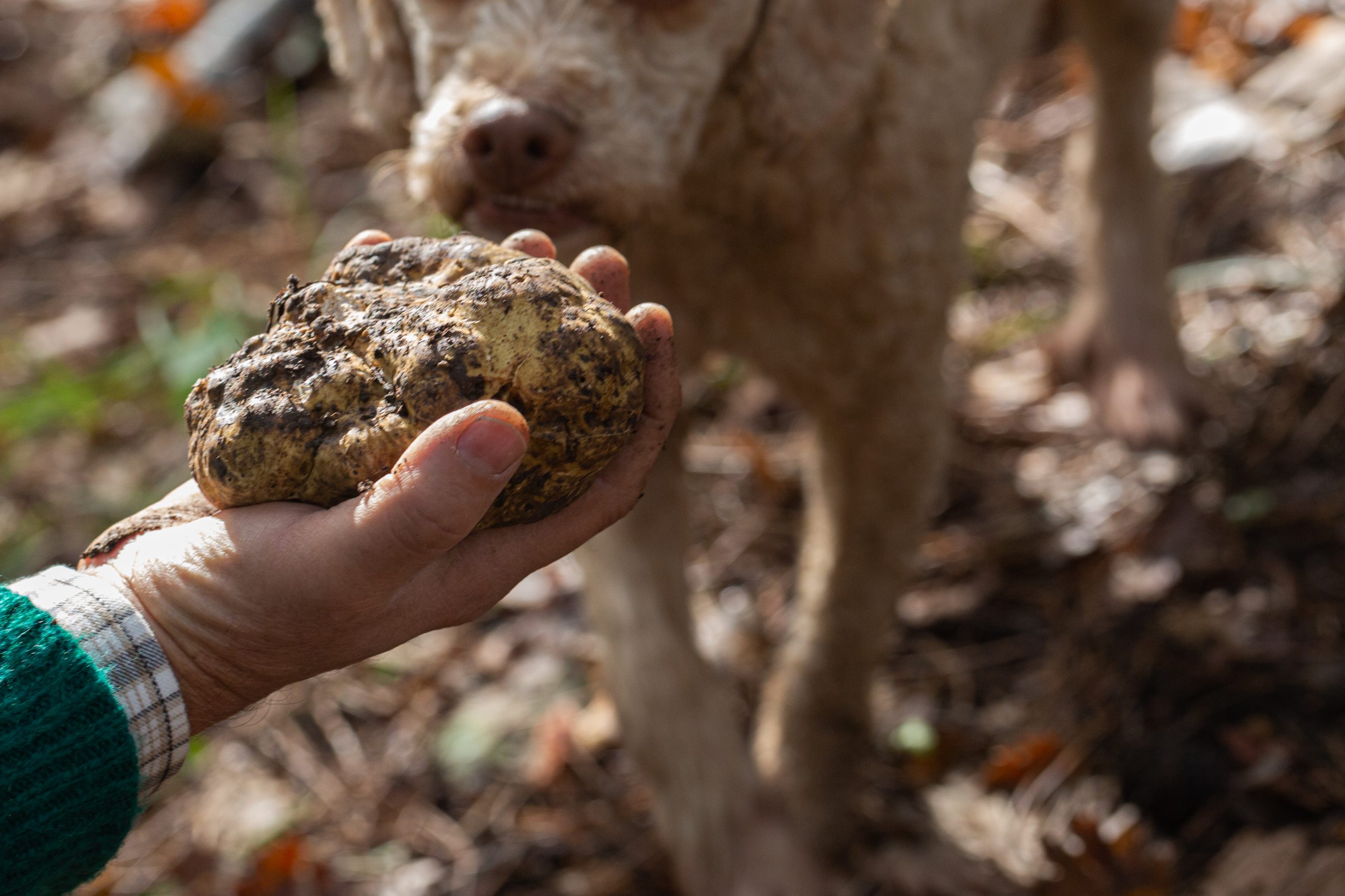 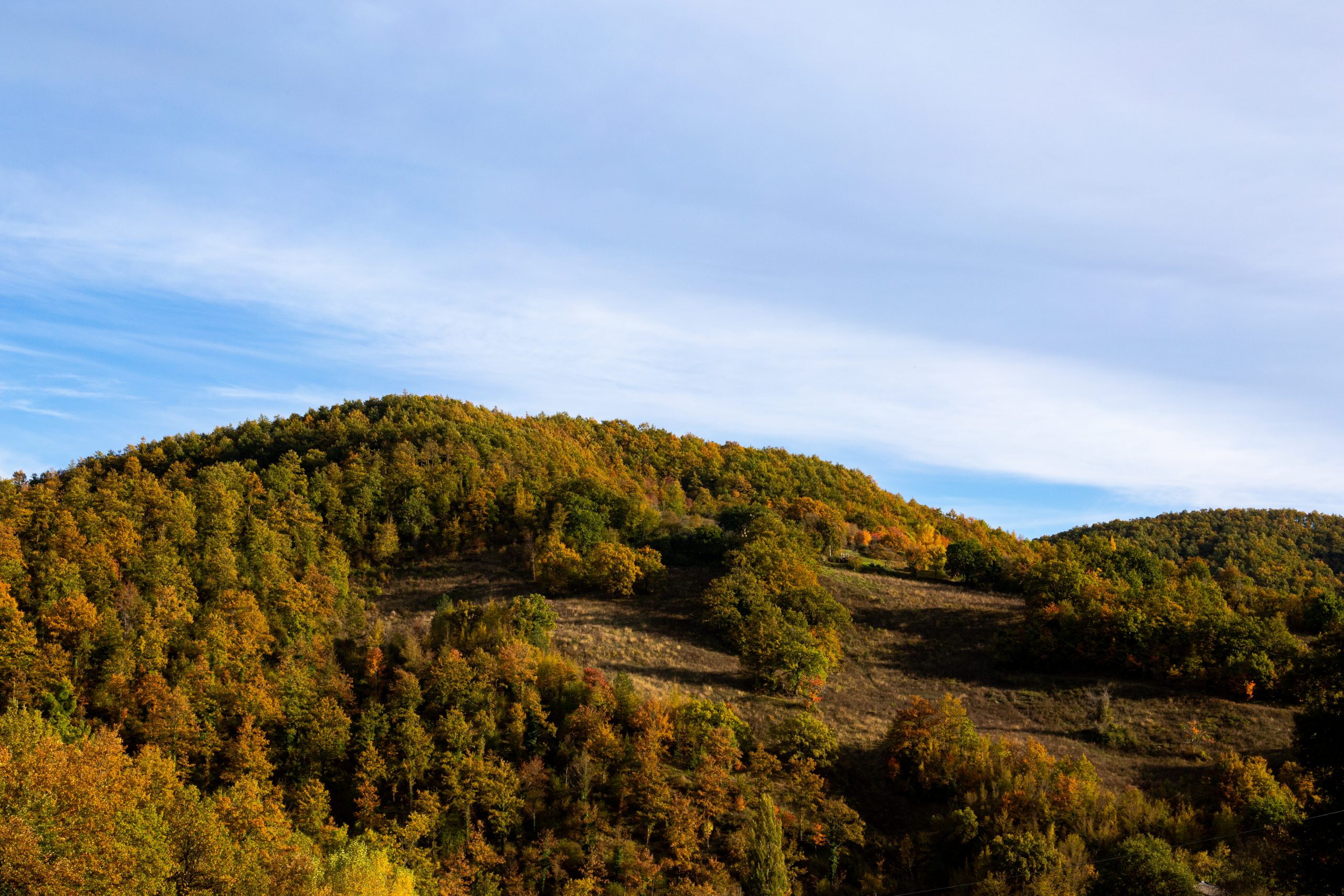 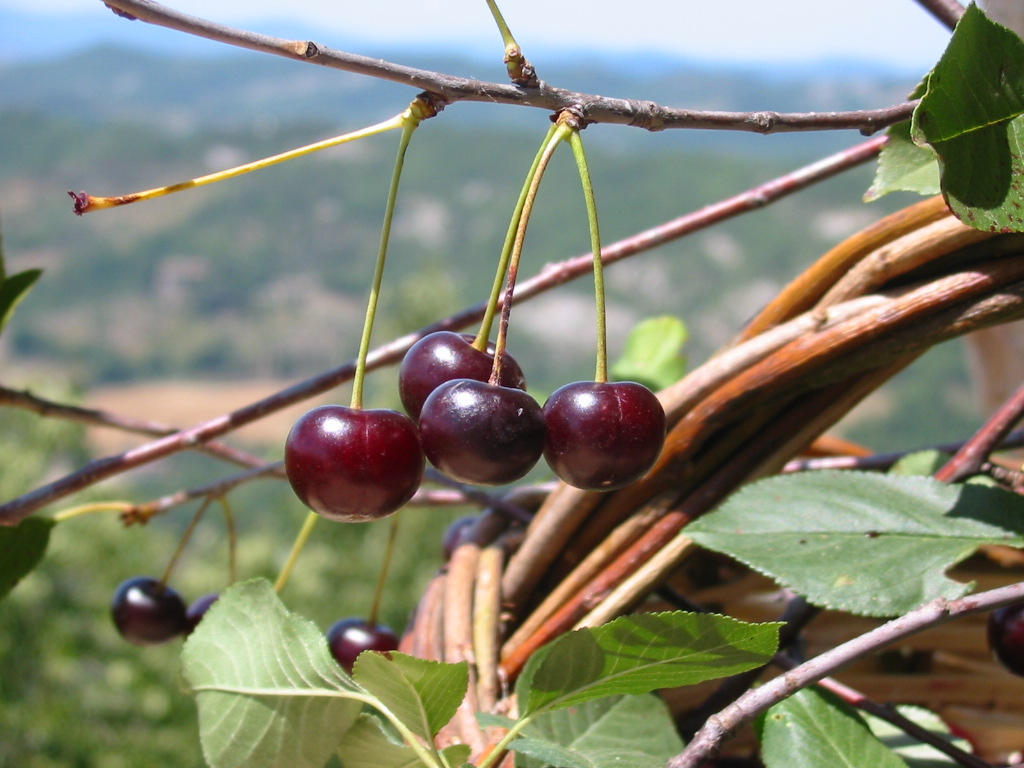