The Council Chamber was once the Church of the Madonna della Mattonata and some of the original decoration is still preserved viz. a 14th century fresco depicting St. Sebastian and, on the vaulted ceiling, eighteenth century paintings with the Three Theological Virtues.

Plans of the layout of the first floor and the ground floor.

The 16th century building which houses the Antiquarium presents a vast panorama of human settlement in the territory around Nocera, dating from as far back as the Lower Paleolithic 800,000 years BCE. It is to this phase of the Stone Age that the lithic industry belongs which was unearthed in the locality called Pascigliano, just a few kilometres from the town centre, and to which the first section of the Museum is dedicated. The artefacts are in flint or in archaic facies limestone and consist of choppers, chopping tools, ‘grattoirs’, scrapers, spear-heads, blades and flakes of stone. Other finds coming from adjacent localities such as Sorifa, Colle Croce, Cordaia and Salmata, show a more advanced knapping technique known as Levallois, and bring forward the dating to the Middle Paleolithic between 120,000 – 35,000 years BCE. The Pre-historic section concludes with exhibits from the Neolithic and the Middle Bronze Age. The former were excavated on a narrow river terraced bank along the Topino (at Le Spogne) and consist of finely worked stone carvings showing signs of finishing, as well as fragments of impressed ware pottery belonging to two different Italian Neolithic facies, the Adriatic and the Tyrrhenian. The presence of both of these types in the same site is evidence that 5,000 years BCE the area around Nocera was already on communication routes connecting the two seas. The Middle Bronze Age material consists mainly of clay fragments of bowls, pouring vessels, carinated dishes, with engraved angular and meander motifs, vases and ribbon-like or rod shaped handles. These were found in Sorifa, a well irrigated area of fluvial terraces and uplands suited to settlement by a pastoral community which would indicate the existence of a village with hut dwellings typical of Apennine culture. The archaeological evidence contained in the Proto-historic section of the Museum shows that there were permanent settlements on the hilltops in the territory from the 8th century BCE on. Fortified villages and burial grounds were located in the hills and objects from excavations in these sites  mainly consist of pieces of pottery and funerary accoutrements in bronze such as pendants, arm rings, spiral bracelets and embossed circular discs. The highest summits like Monte Pennino and Campo la Piana were reserved for religious ceremonies and ritual practices. Particularly fascinating are the ex-votos in stylised human form and the remains of sacrificial animal victims.

Even the Pre-Roman Noukria from the 4th century BCE on began to suffer mass influxes on the part of its Etruscan and Roman neighbours. Evidence for this derives from the numerous finds of red figure skyphoi and kraters as well as black-glazed ware indicative that banquets and symposia were taking place. The political and economic structure of Central Umbria must have undergone a radical shake-up after the outcome of the Battle of Sentino, in 295 CE, when a coalition of Italic tribes, among whom there must surely have been the Ancient Umbrians, was defeated by the rising power of Rome, in the vicinity of present-day Sassoferrato. In all likelihood, Nocera, in a similar way to neighbouring Camerino, entered the Roman world on the basis of an foedus aequum,(alliance of equals), that is to say maintaining a certain amount of administrative autonomy and gaining even greater benefits, especially economic ones, from the construction of the Via Flaminia in about 220BCE. Strabo, a Greek geographer whose life extended over the year ‘0’, declared: “There are other densely populated towns, who are more in favour because of their position along the Way than because of their political importance, such as Foro Flaminio, Nocera, which produces wooden vases, and Foro Sempronio”.

Some inscriptions and the bases of columns dedicated to Gallienus, Caligula, Hadrian and Julia Domna, the wife of Septimius Severus, bear witness to the fact that, over the years, the cost of maintaining this important road was borne by the Empire. Funerary inscriptions, found in  the localities of Le Case and Maestà di Picchio, establish the northernmost and southernmost geographical boundaries of the Roman town of Nuceria, which was probably situated at the foot of the hill where the Medieval town now stands. In the Roman section, a large room is dedicated to the Via Flaminia and thanks to a model one can follow the route of the ancient Way and interactively peruse the archaeological remains that are still extant today along its route. Also on display in the same room, there is part of a circular mosaic from a Late- Imperial Baths complex which originally had a diameter of 9 metres. Partially unearthed in the 1970s, at a site called Le Spogne, in the vicinity of Nocera Scalo, it was, more than likely, part of an enlargement of the residential and baths complex which, in Imperial Times, was situated slightly higher up on a stretch of artificially created terracing along the Flaminia. In 1996, a further excavation conducted in the locality Zingaretti just outside of Nuceria, uncovered Baths belonging to a privately owned Roman villa dating from the 1st century CE. Among the most significant finds there is a shard of a bottle in blue glass bearing Paleo-Christian engravings from the 4th century CE, a statue of Venus and Priapus, as well as stuccoes and fragments of precious marbles coming from all over the Empire, which once adorned the interior of the villa. The stratigraphical sequence at the villa is of enormous archaeological interest as it shows that there was human habitation here for about eight centuries, over the course of which various people and cultures succeeded one another. Renovation to the walls and the mosaic had already taken place in the 4th century CE.

During the Gothic War of 550 CE, the remains of the villa were probably used as a military outpost by the troops fighting with Totila and, finally, in the Early Middle Ages, they formed the basis for the construction of a basilical church. It is to this period that the final section of the Archaeological Museum is dedicated. The showcases contain some of the Lombard funerary accoutrements recovered from the Necropolis at Portone; a burial site which is world renowned for the number and richness of the finds made there. In the first instance, the tombs came to light fortuitously but, subsequently, they were thoroughly excavated under the direction of the archaeologist, Angelo Pasqui, between 1897-1898. In the tombs of females, there were necklaces in amethyst, vitreous paste and gold, combs made from bone, crosses in gold leaf, pendants and bronze brooches decorated in relief, while in the male tombs the fittings were predominantly military in nature, consisting of large iron swords, lance heads, umbones or shield bosses, as well as, iron bits and footstools damascened in silver. The burial site dates from the first period of the Lombard invasion of Italy, around 570 CE, and remained in use until the middle of 600 CE when Nocera found itself on the boundary line between the Duchy of Spoleto and the Byzantine Corridor. For this reason, scholars include the town among the gastaldates of the Duchy, that is to say among the key constituents of Lombard military power, responsible for defending the frontier. Some of the material finds are now kept in the Museo dell’Alto Medioevo in Rome, while, others are divided between the Civiche Raccolte Archeologiche and the Castello Sforzesco, in Milan. Yet another Lombard burial site was discovered in the 1970s, near Nocera, in the locality known as Pettinara. The vastly inferior nature of the accoutrements compared to those found at Portone, has led scholars to conclude that, in this case, they are dealing with an autochthonous population, under subjection to the Lombards, who were living in a rustic settlement in proximity to the burial site. Some of the exhibits come from the archaeological strata relating to the Early Medieval Basilica situated in the Zingaretti locality. 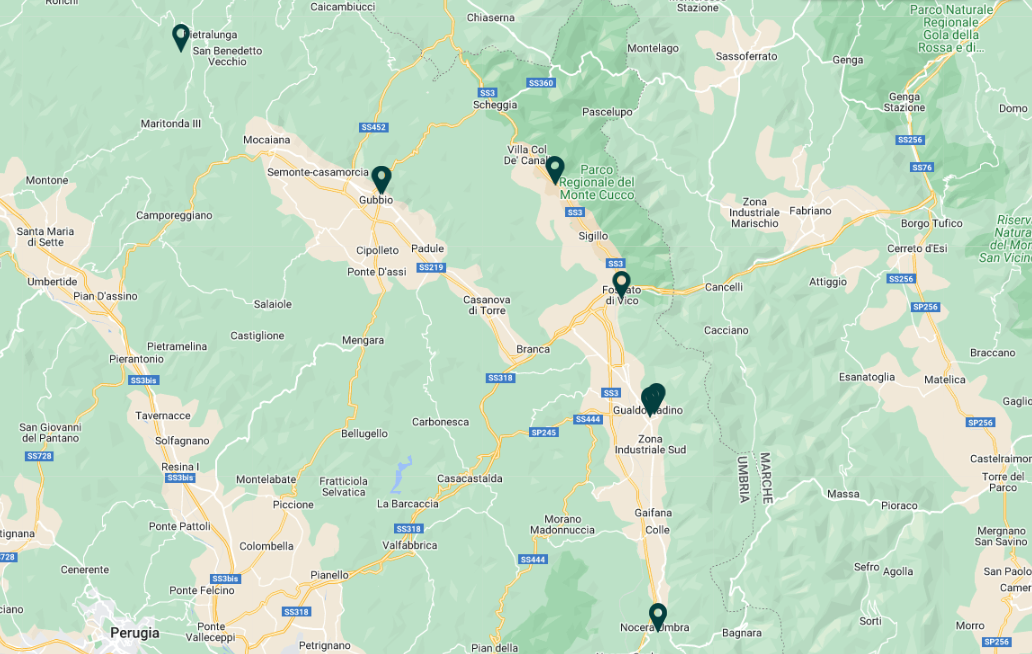 THE MUSEUM IN NOCERA UMBRA 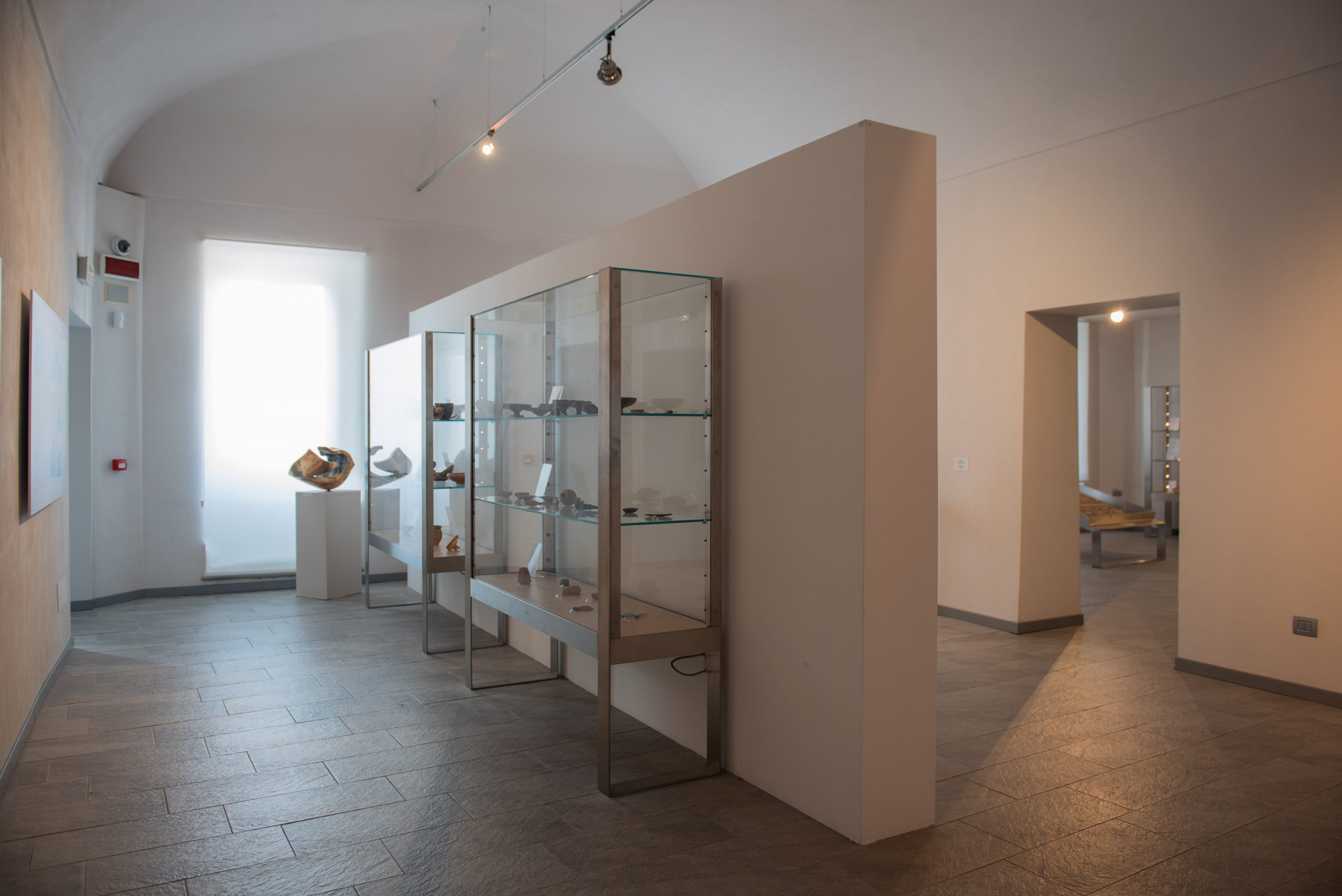 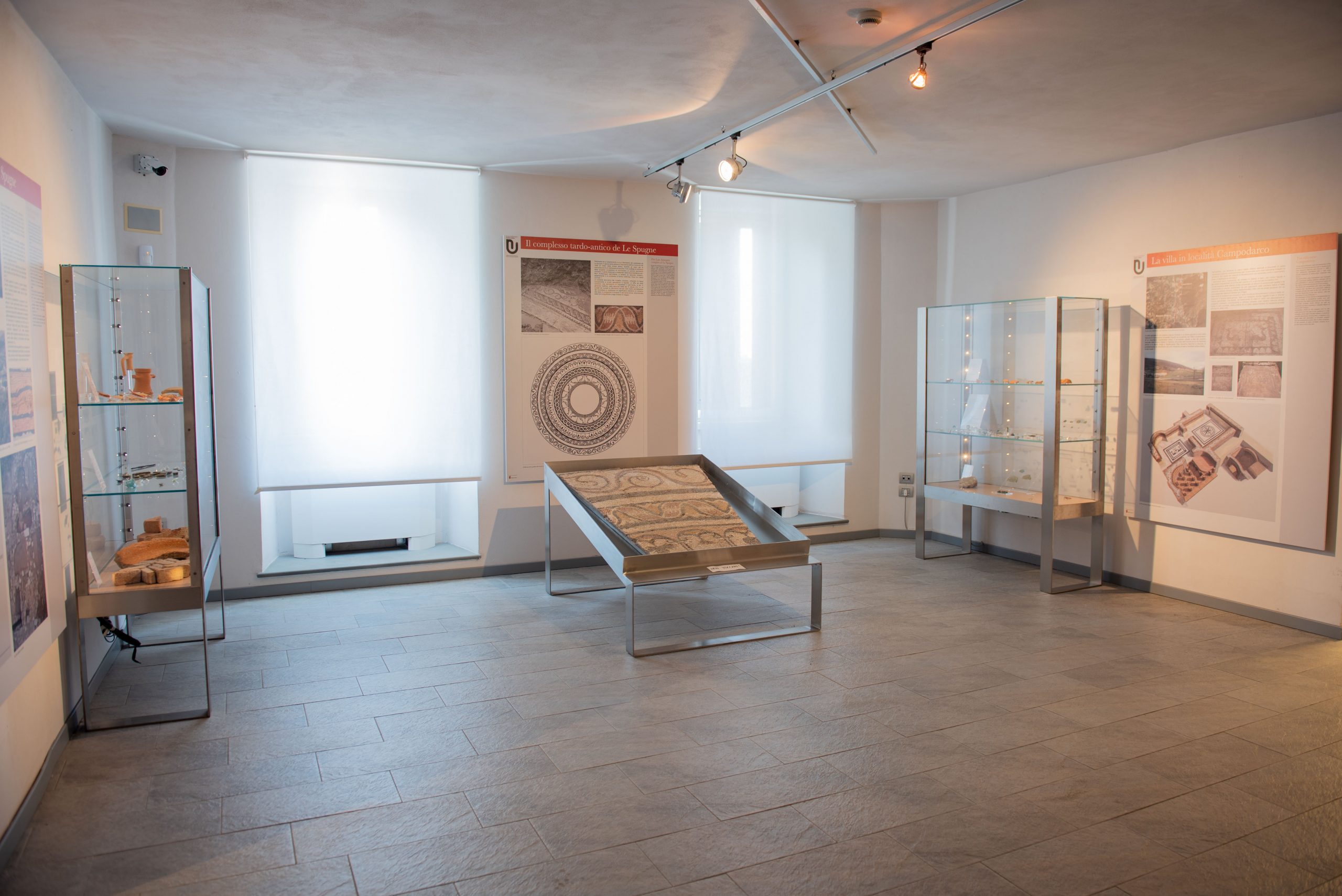 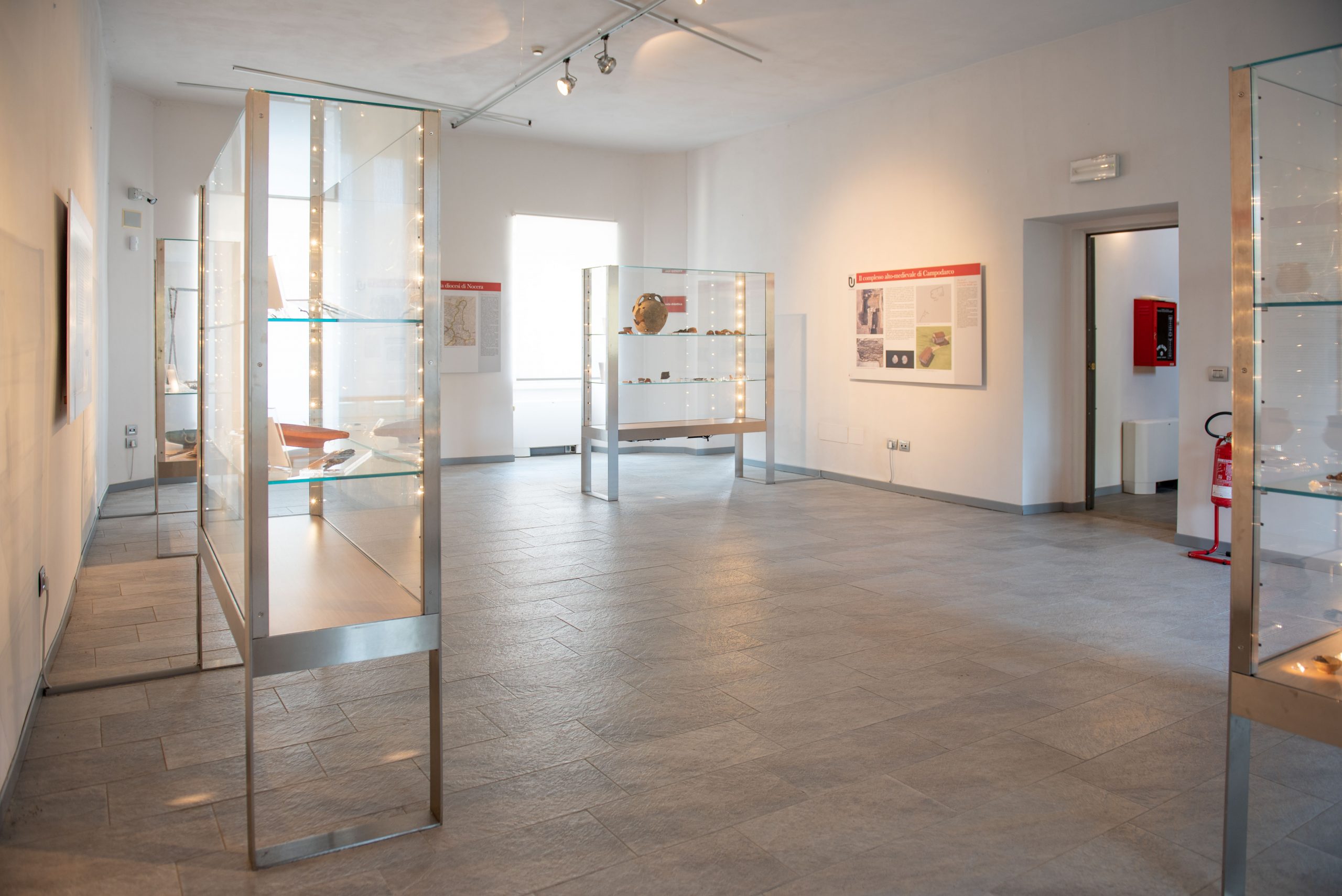 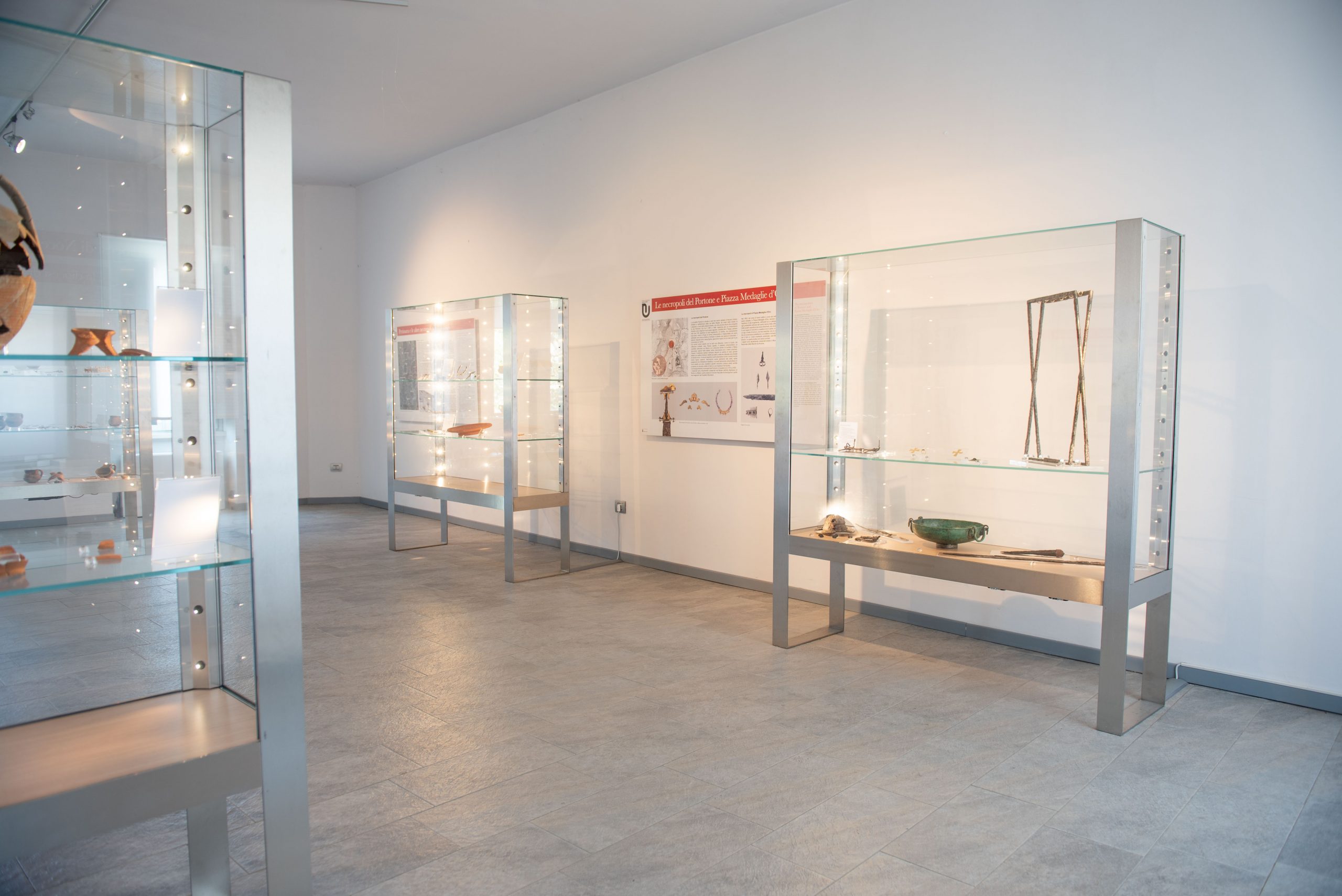 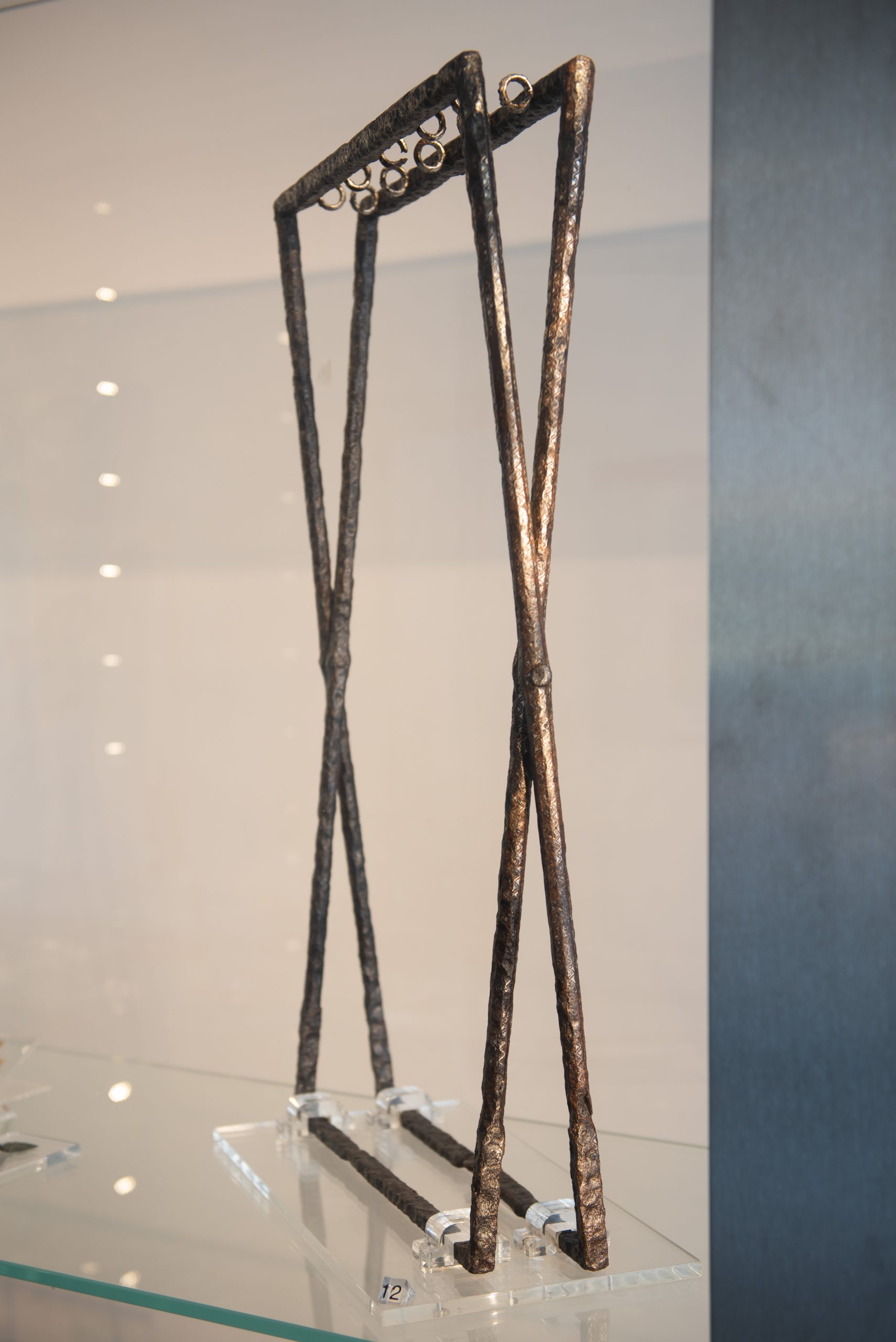 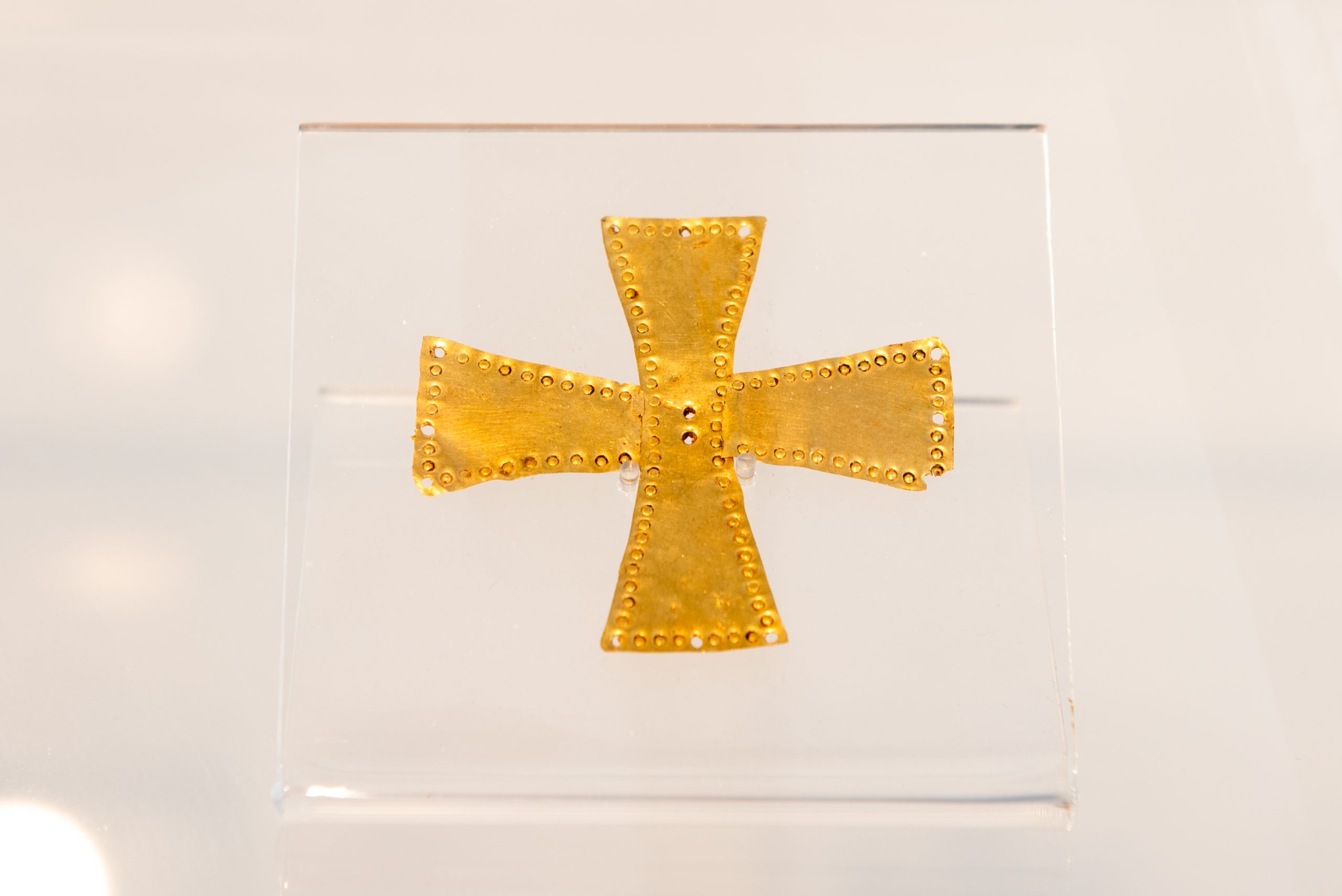 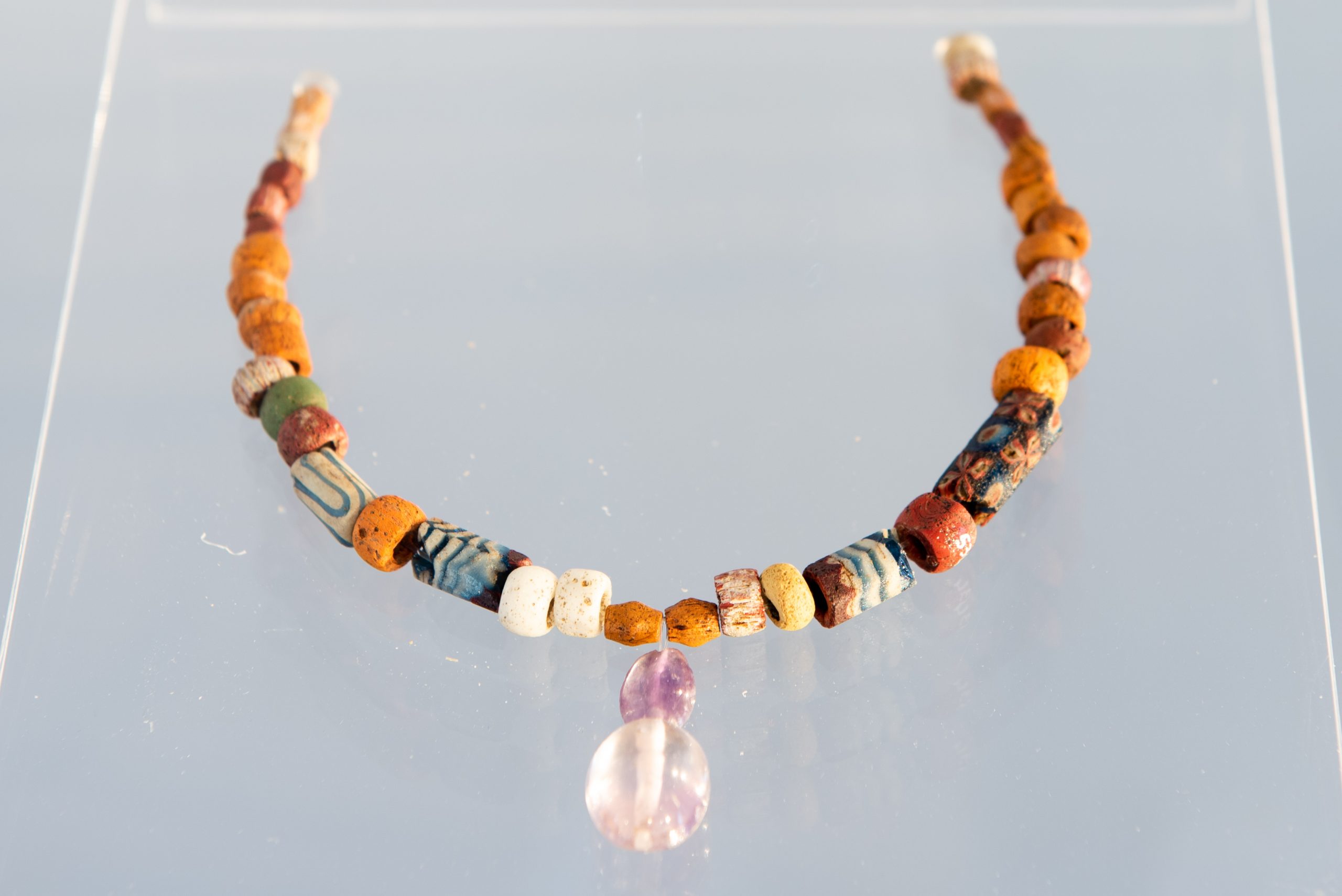 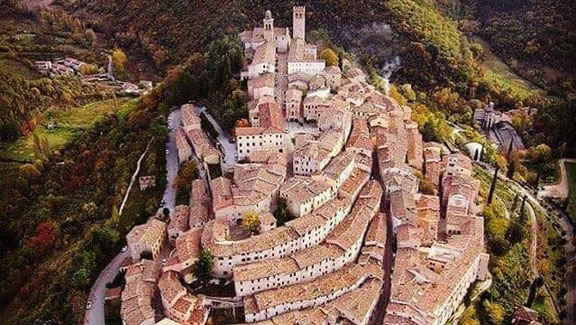 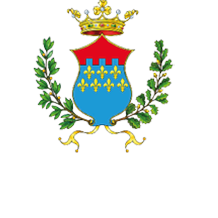