The itinerary is intended to promote the extensive archaeological heritage which documents the important level of political, social and economic development achieved by the populations of North-East Umbria following the romanization of the area. Roman expansion into Umbria was preceded by strong cultural and commercial ties from the 4th century BCE on, but was formalized after the Battle of Sentino in 295 CE. The subsequent opening up of the Via Flaminia brought with it new possibilities of development and prosperity to the territory. It was constructed by the Consul, Caio Flaminio, in order to ensure Rome had a quick military route to the conquered territories, and its Umbrian tract terminated here, when it crossed the Apennines through the mountain pass at Scheggia, known in antiquity as ad Ensem,  en route to the Adriatic. Monumental remains of public buildings and temples, as well as numerous inscriptions, beautiful mosaics from Roman houses and the rich fittings from burial sites all tell of thriving towns and important centres of habitation situated at the crossroads of major trading routes. The itinerary also offers the opportunity to discover both the ancient route followed by the Consular Way, and the numerous bridges and other construction works which were needed to overcome the difficulties presented by a mountainous terrain with its many waterways that had to be crossed.

The Roman town of Iguvium (Gubbio) occupied a strategic position between the Apennine passes and the valleys of the Rivers Chiascio and Assino, both tributaries of the Tiber. It was the first Umbrian settlement to ally itself to Rome, and this important link meant that the town already had a Mint at the end of the 3rd. Century BCE and was able to produce its own coinage, the ikuvins.  Upon being created a municipium in 89 BCE, the town began to expand onto the plain where its imposing theatre was built in proximity to the baths and the forum, one of the few to still exist in Italy. Erected at the end of the Republican era, it boasted two tiers of arches, some of which are still standing, and was originally able to accommodate 6,000 spectators. There is also ample evidence of private construction in the remains of numerous Roman houses which feature elegant paving in mosaic and cocciopesto, both products of a well-established local artistic workshop and a clear indication of a highly-cultured and wealthy clientele. Some important examples are the domus of Scilla, which today houses the archaeological collection of the Antiquarium, and the domus of the  Banquet, in the area near the Forum. Some aspects of daily life in Roman Iguvium, from Republican times to the end of the Empire, are illustrated in the Civic Museum in Palazzo dei Consoli. Especially remarkable is the collection of inscriptions carved in stone containing details of names, social standing, political offices held, occupations and locations. The domestic environment is highlighted by the rich collection of kitchenware, and the activity of the Baths, by containers for unguent and various implements for personal hygiene. Rare examples of Republican and Imperial coins represent the commercial world, while some extremely interesting funerary objects, decorated with images of Harpocrates, indicate the co-existence of oriental cults alongside the traditional and official pagan ones.

Four frontier sanctuaries were built at the extreme edges of the territory of Iguvium, along the main communication routes, in conformity with a tradition already current among the Umbri. The oracular temple of Giove Pennino lay along the Via Flaminia, in the vicinity of Scheggia, then known as ‘ad Ensem’, which was a stopping-place dependent on the town of Iguvium. To the South, along the Chiascio Valley, was the temple dedicated to Marte Ciprio and, in a dominant position over the Assino Valley, to the West, there was the one dedicated to Diana. The  divinity honoured in the temple at the farmost north-western edge of the territory of Iguvium, in the direction of Pietralunga, has not been identified. In Roman Times, this small hill town, known as Forum Julii Concupiensum, was a stage on the journey between the Upper Valley of the Tiber and Carpina and the Via Flaminia at Cagli, in the present-day Region of the Marches. Evidence of this is to be found along the remains of the roads with ancient slab paving which still bear the signs of the ruts made by cart wheels.

The Roman colonisation of the territory of Fossato di Vico took place presumably between the 3rd and the 2nd centuries BCE. The settlement was called Helvillum, and thanks to the construction of the Via Flaminia, became a vicus and a mansio, that is to say, an important staging post for travellers, where horses could be changed and food and lodging could be obtained. Under Caesar Augustus it was recognised as a post house and mentioned in the Roman itineraria, or traveller’s guides, which contained details of roads, distances and towns. In the Antiquarium, housed in the old Palazzo Comunale, there are some architectural fragments and other materials retrieved by excavations carried out at the top of the settlement, belonging to a domus and a cistern dating from the end of the 1st century BCE. Among these is a fragment of a statue of a female figure resembling the famous Landolina Aphrodite. To the north of the site, where the ancient route of the Via Flaminia encounters the modern one, is the San Giovanni Bridge which still conserves the supporting piers of a Roman bridge built in the 1st century CE. After the Fall of the Roman Empire in the West, Helvillum was sacked and destroyed. A new settlement was built in a more dominant position and called “Fossaton”, a Byzantine word meaning “fortification”.

The Spiano Bridge in Sigillo is the monument whose existence identifies the ancient Roman municipium of Suillum. This is a complete Roman bridge, 32 metres long and 3 metres wide, an imposing architectural masterpiece, which stands out from the surrounding landscape outside the town. It was built in the early years of the Empire from large, roughly hewn blocks of corniola (a local type of limestone) across the Fonturce Torrent on the ancient Via Flaminia.

The ease of communications which the Via Flaminia signified was what attracted the Umbrian population of Tarsina and convinced them to abandon their fortified hilltop settlements in favour of new centres of habitation in the valley. At the end of the 3rd century BCE, a market centre developed on the plain along the Consular Way, and out of this, the town of Tadinum gradually took shape.  From archaeological material and from an analysis of the landscape, it emerges that there was a thriving community actively engaged in agriculture and other woodland and pastoral occupations, together with a number of outlying rural villas. The urban area probably arose in the Republican Era and was situated at Sant’Antonio di Rasina, in the Taino district, where a Roman well has been excavated and also mosaics connected to the presence of a Baths for the refreshment of travellers. The Rocca Flea Museum contains a large number of finds which indicate the grandeur of Roman Tadinum. Among these is a highly-prized slab belonging to a sarcophagus, from the 2nd century CE,  on which is carved the clypeated image of the deceased and a funerary inscription, from between the 2nd and the 3rd centuries CE, written in dactylic verses celebrating Severa. Also of interest is the funerary stele, from the 2nd-1st century BCE, depicting the Ditis gateway, the entrance to the afterlife, which confirms the existence of a villa or rural settlement. The brooch carved out of bone, which was found around Taino, is an example of an object which was extremely popular in Imperial Times. This vibrant period was followed, in Late Antiquity, by the crisis caused by the devastations of the Barbarian Invasions. In 552, Tadinum was the scene of the Battle of Tagina and the burial place of Totila, King of the Goths, after his defeat by the Byzantine General, Narses.

The Ancient Umbrian town of Noukria  (Nocera Umbra) became part of the Roman world by means of a treaty of alliance and, subsequently, developed into a flourishing municipium. The Roman town, Nuceria, was situated at the foot of the hill, in the valley of the River Topino, through which the Via Flaminia also passed. In the Roman section of the town’s Archaeological Museum a number of finds excavated locally are on display. Particular attention is given to the Via Flaminia through a plastic model and multi-medial aids documenting its ancient route and the extant archaeological evidence of where it passed, including bridges and retaining walls like the massive one located near Le Spogne. Certain inscriptions and bases of columns dedicated to Gallienus, Caligula, Hadrian and Julia Domna, the wife of Septimius Severus, indicate that over the years, restructuring work along the Consular Way was carried out at Imperial expense. Also worthy of note is the milestone (cippo miliario) indicating the distance from Rome, made in the time of Vespasian, when restoration work was carried out on the branch road to Ancona. Other valuable findings document the presence of highly elaborate thermal and residential buildings. Besides a fragment of a circular mosaic from late Imperial Times, one can also admire stuccoes and precious marbles which once adorned the interior of a 1st century CE villa and a fragment of a bottle in blue glass bearing a 4th century Paleo-Christian engraving, as well as a statue of Venus and Priapus, coming from the same source. 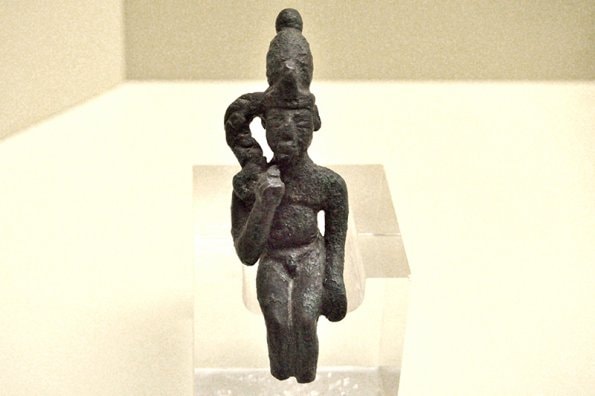 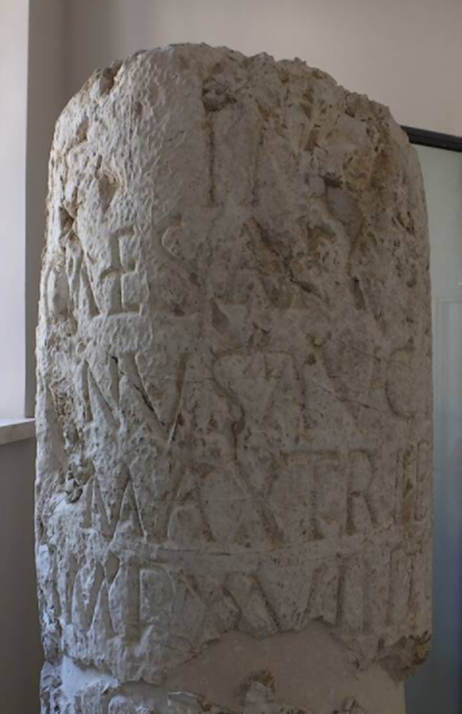 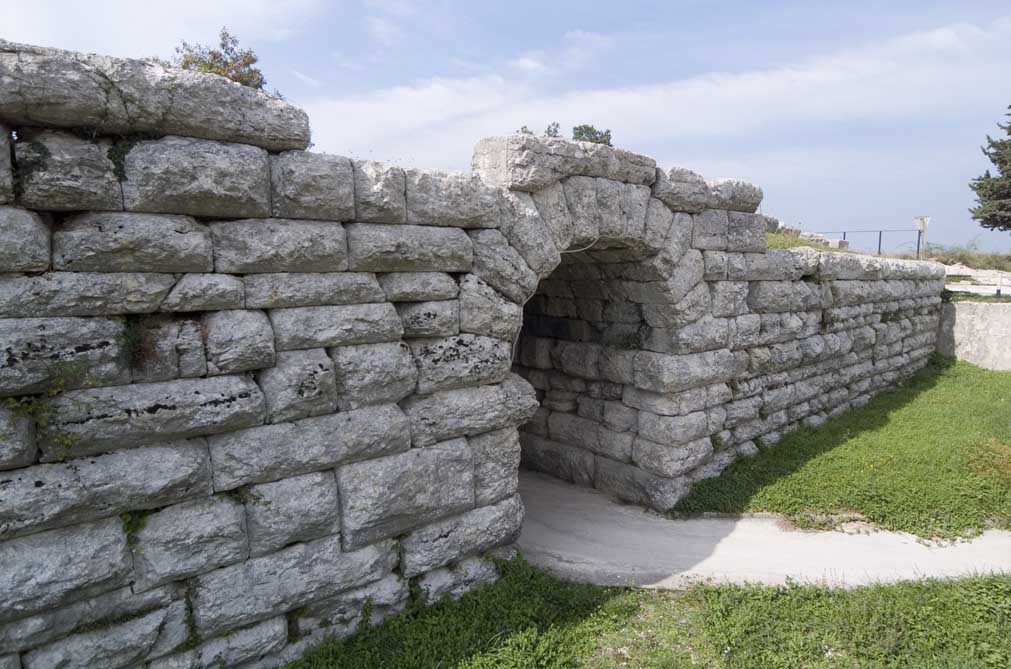 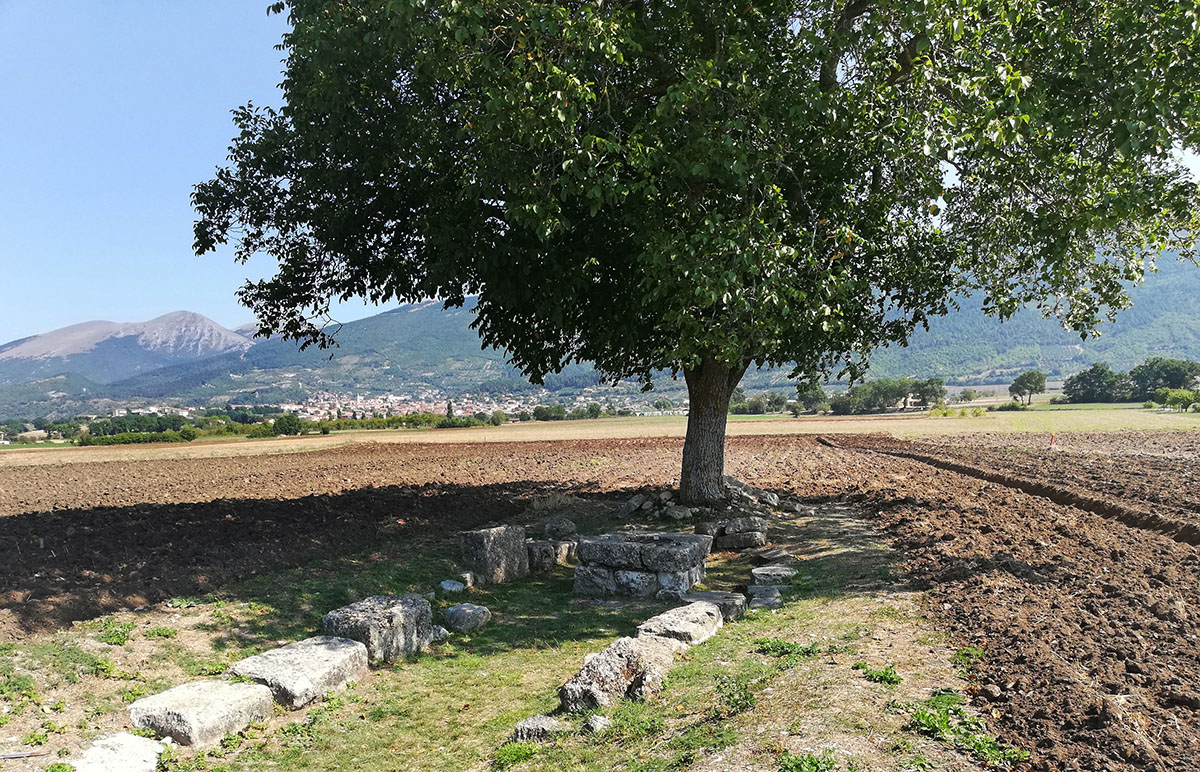 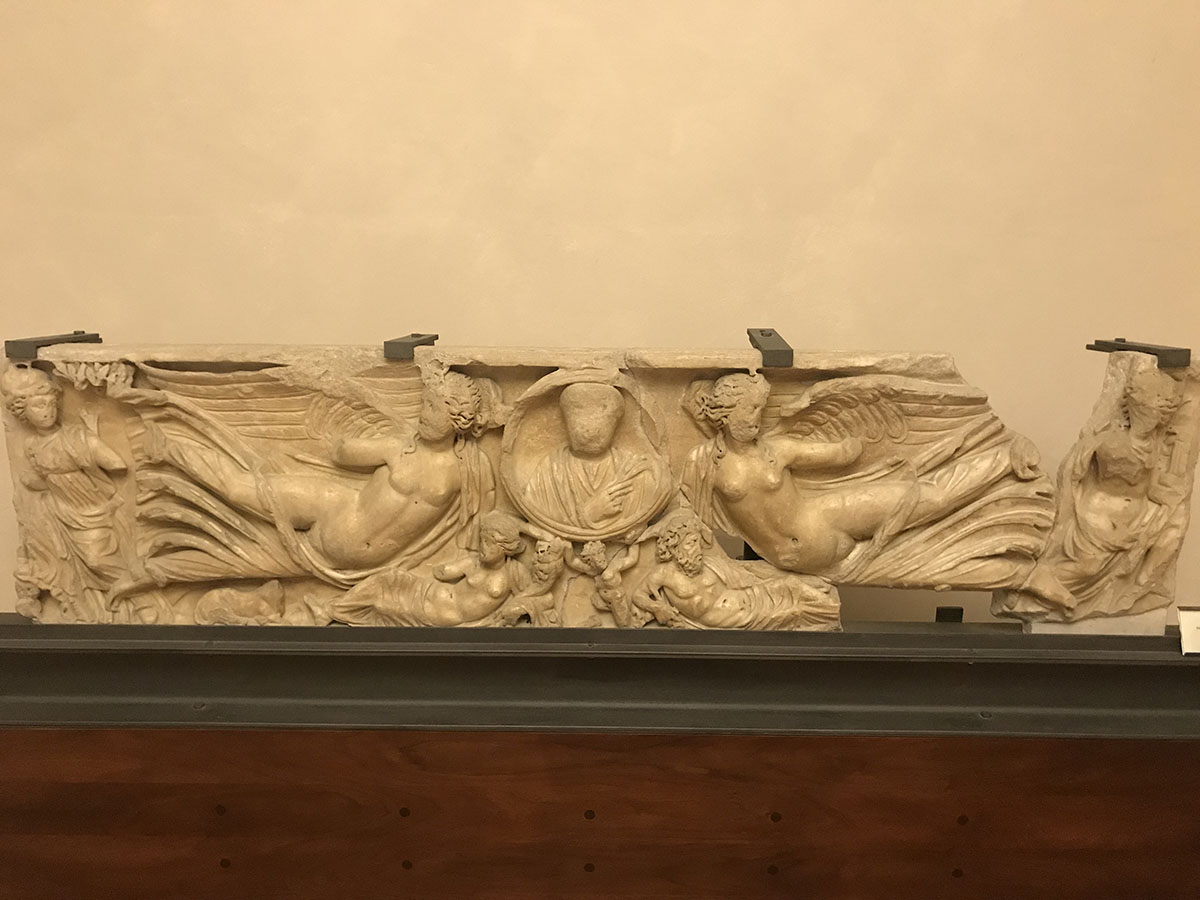 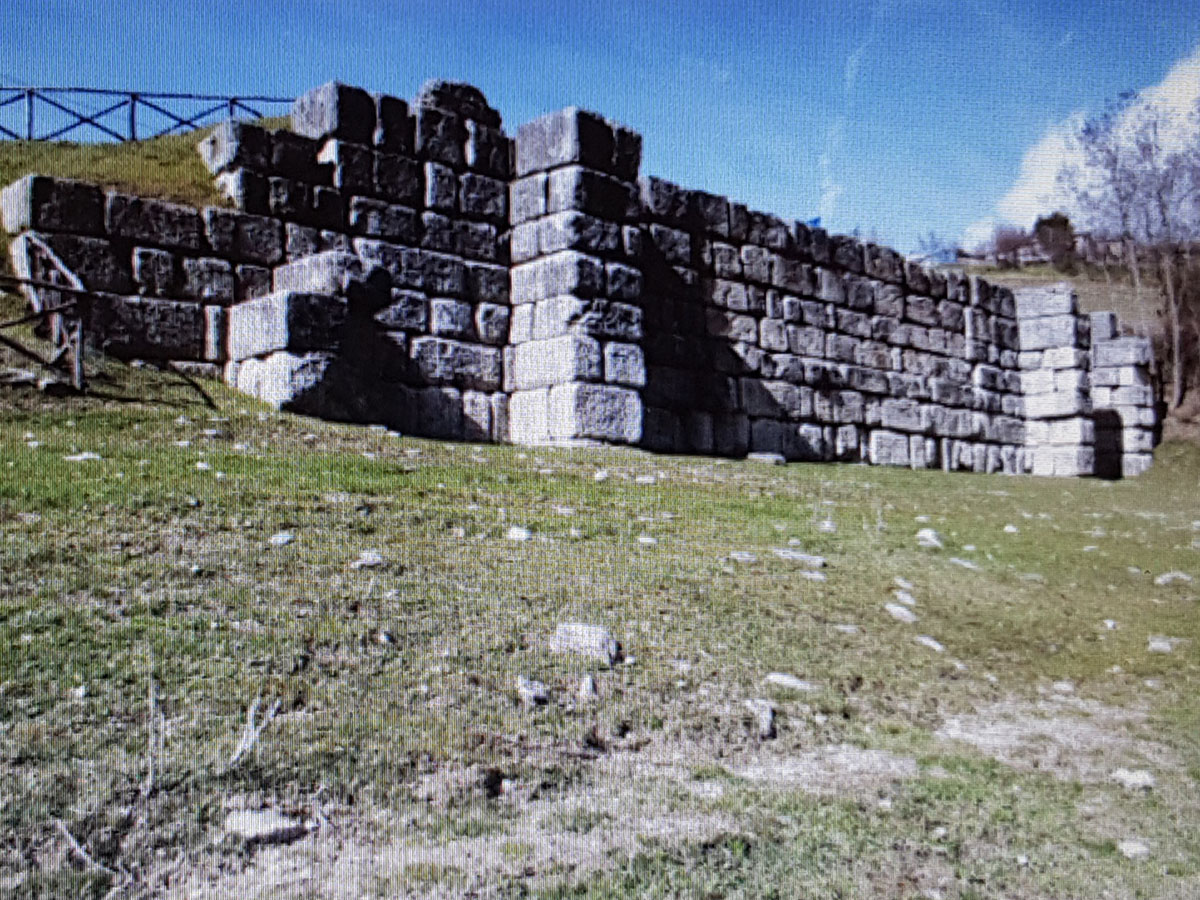 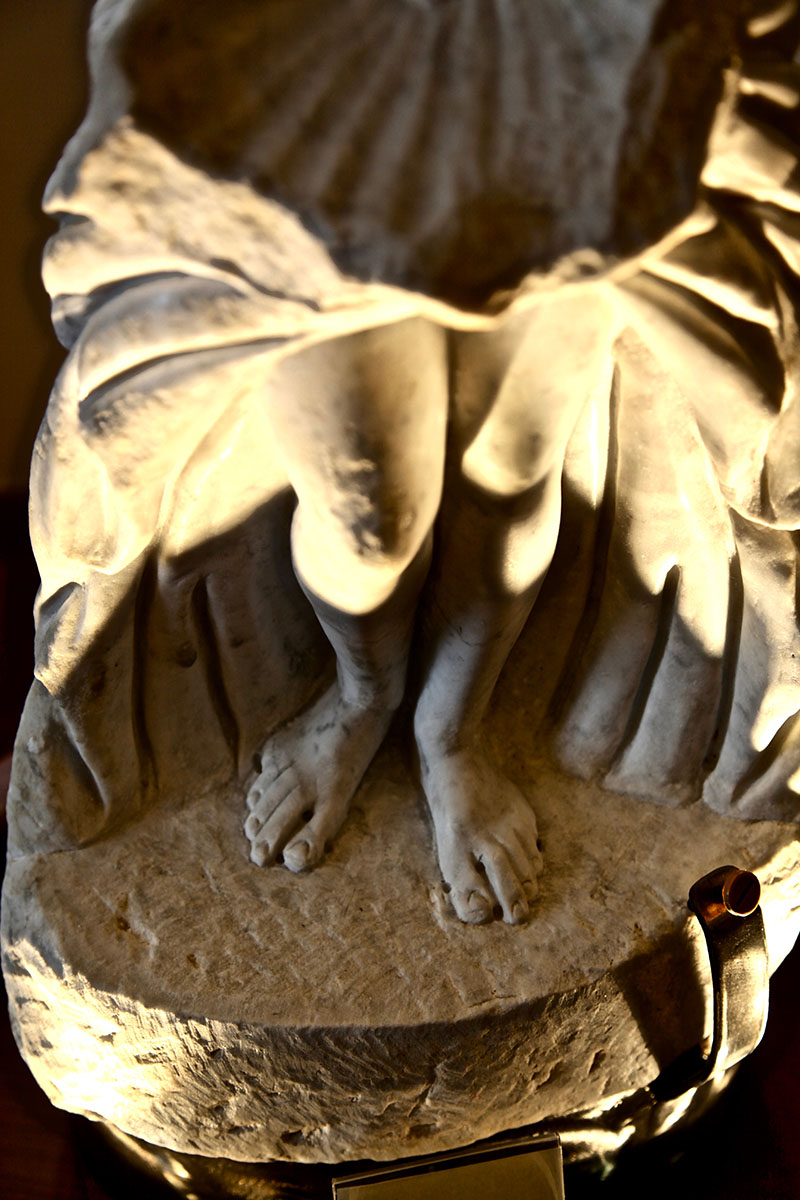 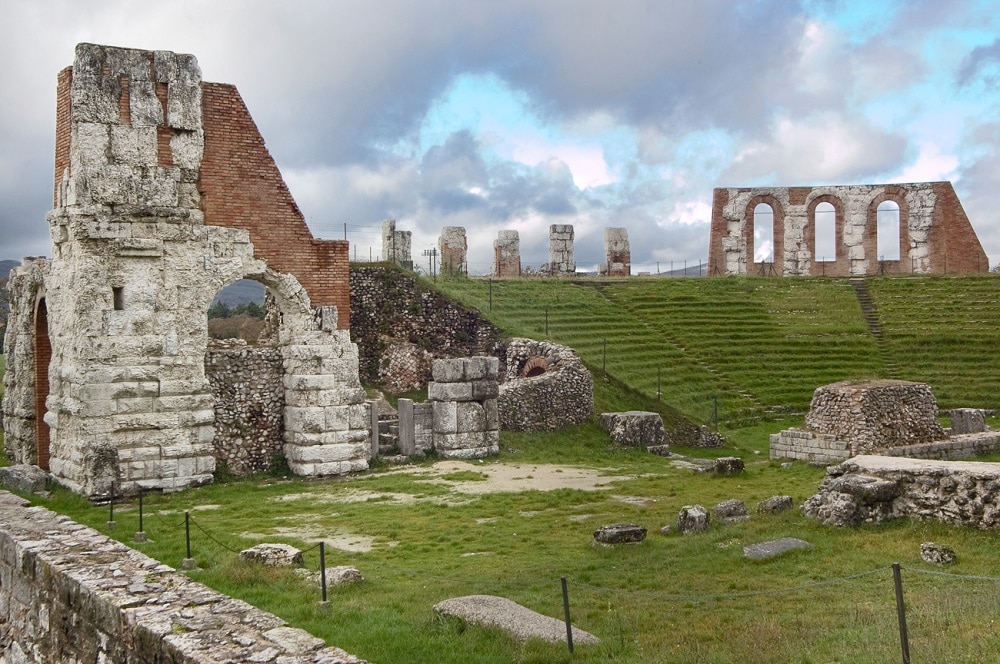